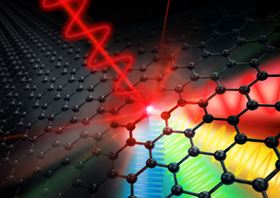 Multiple optical harmonic generation—the multiplication of photon energy as a result of nonlinear interaction between light and matter—is a key technology in modern electronics and optoelectronics, because it allows the conversion of optical or electronic signals into signals with much higher frequency, and the generation of frequency combs. Owing to the unique electronic band structure of graphene, which features massless Dirac fermions, it has been repeatedly predicted that optical harmonic generation in graphene should be particularly efficient at the technologically important terahertz frequencies. However, these predictions have yet to be confirmed experimentally under technologically relevant operation conditions. Here we report the generation of terahertz harmonics up to the seventh order in single-layer graphene at room temperature and under ambient conditions, driven by terahertz fields of only tens of kilovolts per centimetre, and with field conversion efficiencies in excess of 10−3, 10−4 and 10−5 for the third, fifth and seventh terahertz harmonics, respectively. These conversion efficiencies are remarkably high, given that the electromagnetic interaction occurs in a single atomic layer. The key to such extremely efficient generation of terahertz high harmonics in graphene is the collective thermal response of its background Dirac electrons to the driving terahertz fields. The terahertz harmonics, generated via hot Dirac fermion dynamics, were observed directly in the time domain as electromagnetic field oscillations at these newly synthesized higher frequencies. The effective nonlinear optical coefficients of graphene for the third, fifth and seventh harmonics exceed the respective nonlinear coefficients of typical solids by 7–18 orders of magnitude. Our results provide a direct pathway to highly efficient terahertz frequency synthesis using the present generation of graphene electronics, which operate at much lower fundamental frequencies of only a few hundreds of gigahertz.