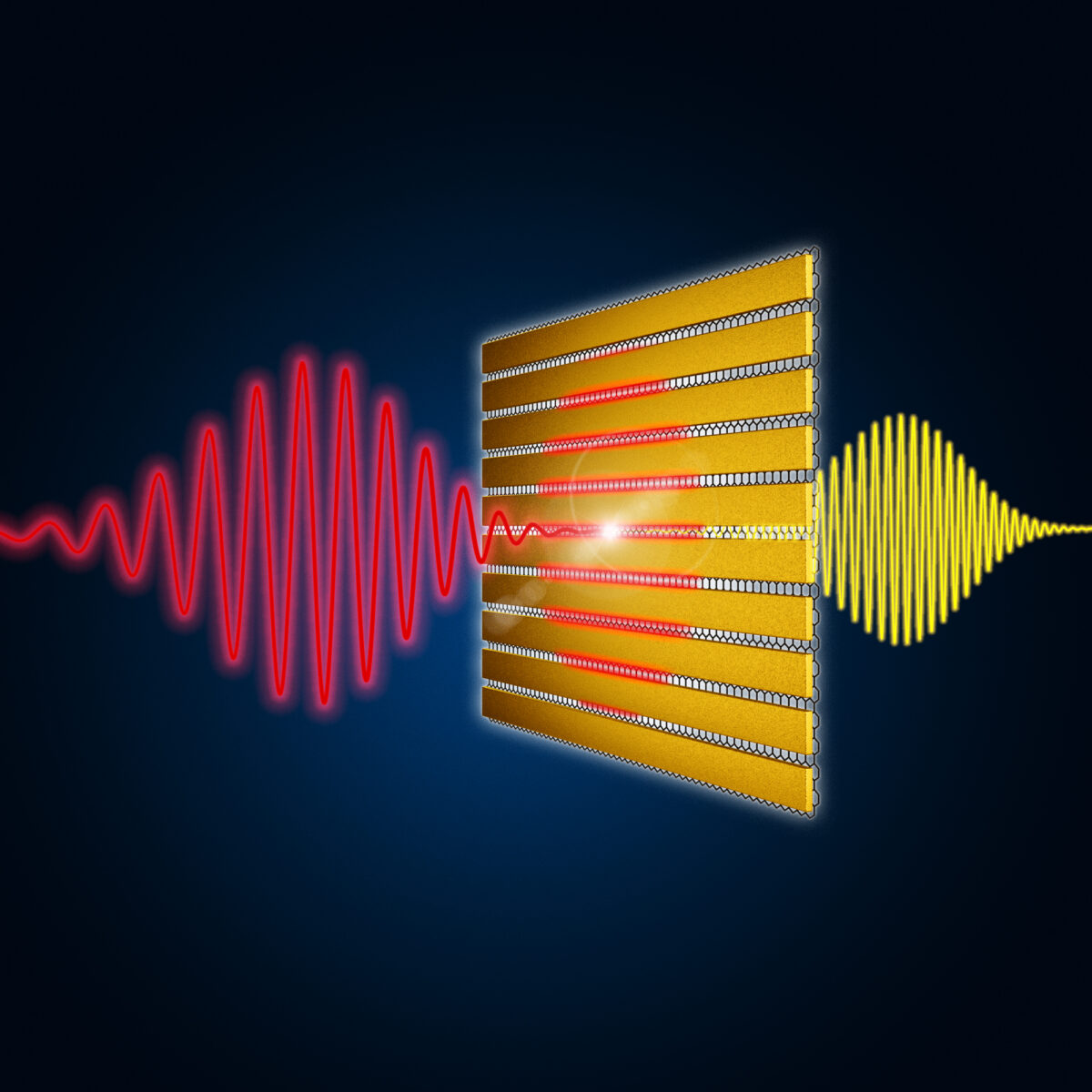 Researchers from various institutes in Barcelona and Germany have demonstrated that a hybrid material consisting of a monolayer of graphene and a metallic grating structure is an excellent candidate for relevant commercial applications in which efficient nonlinear conversion of (invisible) terahertz light is required. This work has just been published in ACSNano, in a paper with Dr Klaas-Jan Tielrooij, leader of the ICN2 Ultrafast Dynamics in Nanoscale Systems group, as last author. A metal grating combined with graphene opens up the road to terahertz nonlinear photonic applications.

Nonlinear optical conversion – i.e. the process by which an incident light beam of a certain wavelength turns into rays of different wavelengths, due to its interaction with the material it passes through – is relevant to for many current and future technologies, such as imaging, information storage and processing, telecommunication, quantum technologies, and other fields.

The ideal material for these applications should provide, first of all, a very high conversion efficiency, which means that a significant fraction of the incoming beam has to be converted into light of the desired wavelengths. It is also required to have a small footprint (that is, as little material as possible has to be used); to be compatible with standard CMOS technology used in most electronic devices; and to be able to operate at room temperature. Particularly needed is an optimal solution for applications in which the incident light is in the terahertz (THz) region of the electromagnetic spectrum. This light cannot be seen by the human eye, yet it is commonly used for applications ranging from airport security to product inspection, and can play an important role in future communication technologies.

Two-dimensional materials are highly interesting for light conversion. They consist of a single layer (or a couple of them) of atoms and thus have almost zero-thickness (this is why they are called 2D materials). This characteristic ensures a small material footprint. In addition, since they are thinner than the wavelength of light, the optical waves propagating in these materials remain in phase. Among them, graphene, a by-now-well-known material made of a monolayer of carbon atoms arranged in a honeycomb structure, is particularly promising. This is because it exhibits very large nonlinear conversion coefficients, especially in the THz range. On the other hand, though, its extremely reduced thickness affects its conversion efficiency, due to the small quantity of matter the light can interact with. To overcome this problem, the authors decided to combine graphene with another material system that enhances this interaction.

A team of researchers from the Catalan Institute of Nanoscience and Nanotechnology (ICN2, Spain), the Helmholtz-Zentrum Dresden-Rossendorf  (HZDR, Germany), the Institute of Photonic Sciences (ICFO, Spain), the Max Planck Institute of Polymer Research, Mainz (Germany), the University of Bielefeld (Germany) and the Technical University of Berlin (TUB, Germany) have combined graphene with a metallic structure that provides field-enhancement, leading to a hybrid material characterized by very high nonlinear light conversion efficiency. As explained in a scientific article recently published in ACSNano, this structure (grating-graphene) produces outcoming light at the new wavelength having an intensity more than 1000 times higher than the one obtained using just graphene.

Dr Klaas-Jan Tielrooij, leader of the ICN2 Ultrafast Dynamics in Nanoscale Systems group and last author of the paper explains: “The combination of graphene and a metal grating leads to highly efficient conversion of terahertz light, reaching up to 1% (in field) for rather weak incident light.” Dr Jan-Christoph Deinert, from HZDR, first author of the work, adds: “This hybrid material made it possible for us to observe light that oscillates three times, five times, seven times, and even nine times faster than the incoming light.”

The outstanding conversion efficiency of this hybrid material guarantees low power consumption in the conversion process, while the compatibility of graphene with CMOS technology allows for integration in devices based on such technology. Overall, this grating-graphene structure presents itself as an excellent candidate for commercially viable applications requiring nonlinear conversion in the terahertz regime, chip-integration, room temperature operation and low power consumption.